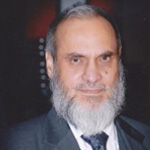 Muhammad Farooq-i-Azam Malik is an accomplished scholar who earned B.A. Honors in Islamiat and Arabic Language in1963, LL.B. in Islamic Law (Shari’ah), 1965, an M.A. in Economics, 1966, Accounting, Auditing, and Business Law Degree, 1975 and a Ph.D. in Business Administration in 1983. After honing his skills within the halls of education, Malik worked for three years as a college professor, five years as an attorney and eighteen years as an audit manager at a major U.S. Corporation. Unfulfilled with his career choices, Malik left Big Business behind to dedicate his life to the Message of Allah. During a residency in Pakistan, Muhammad Farooq-i-Azam Malik started an organization called Anjaman-e-Islãh-e-Muãshra (Social Welfare Society – 1959) to reform Aqeedah and fight against un-Islamic local customs. This organization worked in all the surrounding villages and was successful in achieving most of its objectives. He also started Tarjama-tul-Qur’an (Translation of the Holy Qur’an- 1963) sessions at various Masãjid and is among the pioneers of the Islamic Circle of North America (ICNA).

His New York Residency would be fruitful as well, culminating in the creation of Dars-e-Qur’an (Qur’anic Study Sessions – 1970) within Bronx and Manhattan. Muhammad Farooq-i-Azam Malik then moved to Houston in 1975, where he was elected three times, for a total of six years, as a Treasurer of the Islamic Society of Greater Houston (ISGH). He was later elected twice in the position of Director of Religious Affairs, as well as the Director of Education, for 6 years. In these positions, he organized the Zonal system of ISGH for children’s Islamic Education and Qur’anic Tajweed. In his eventual position as President of ISGH, which he held for 2 years, Malik lead the community in buying the Zonal facilities at the North, Southwest, Southeast, Northwest and Bear Creek. He would put these facilities in Owqãf (Trust) with North American Islamic Trust (NAIT). Later serving as Chairman of the Planning and Administration and Vice President of the ISGH for 10 years, Malik cultivated numerous initiatives that benefited his community. He is a founding member of the Islamic Education Institute of Texas (IEIT) and the Institute of Islamic Knowledge (IIK). Currently, he is serving the Islamic Society as Chairman of the Al-Da‘wah Committee.

On the National Level, Muhammad Farooq-i-Azam Malik worked as Vice Chairman of the Islamic Coordinating Committee (ICC), has been a member of ISNA Majlis-e-Shura and the Board of Advisers. To date, he is part of the Board of Trustees of North American Islamic Trust (NAIT). Muhammad Farooq-i-Azam Malik is also an accomplished author who has written several books that dedicated edicated solely for the sake of Allah (Fee-Sabee-Lillah)